My guess is that you are reading this article either because you yourself are struggling with this terrifying illness, or someone close to you is. And you’re desperate for information on how to stop panic attacks.

Panic attacks are no laughing matter, to be sure. According to NIMH it affects about 6 MILLION adults in the United States. Now that may seem like a very small number (it’s only about 0.053% of the population), but to each of us who deal with panic attacks on a regular basis, numbers simply don’t matter. We all just want help.

I am here to offer hope! Hope that you can lead a “normal life” again, one that is not affected by panic attacks, or determined by fear. I suffered from panic attacks for two years before I figured out how to reverse it. And now, I am happy to say, I live entirely free from panic attacks! And you can too.

AND you can do it without complicated prescriptions and having to remember your pills multiple times a day! Does it sound too good to be true? It isn’t. Let me tell you how.

My panic attacks started after the birth of my 3rd child. I had never before struggled with anything like it, so I was terrified when my first symptoms knocked the wind right out of me. I was completely breathless, my heart felt like it would literally beat right out of my chest, and my whole being told me that I was going to die. I was also at home alone with my three kids under three.

I thought I was having a heart attack, so naturally, I called the ambulance. The EMT’s treated me like nothing was wrong (they told me to “just calm down”) and none of them even mentioned the possibility of it being a panic attack. They reluctantly took me to the hospital, convinced I was just overreacting. Even the doctors at the hospital offered no sympathy and did nothing to console me – they simply sedated me and sent me home.

Over the next few days I suffered more and more attacks, still unsure about what they even were. We traveled to see my father-in-law who offered to help care for us and the kids while we searched for answers. Nothing offered hope and we still had no diagnosis. 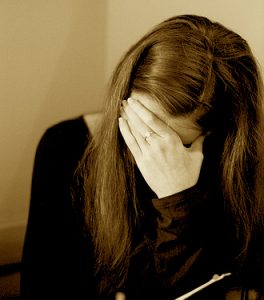 Four days after the onset of attacks, my husband took me out to dinner to just relax after our trying week. Unfortunately, another attack started in the middle of dinner and I ran to the women’s bathroom for some quiet, hoping that getting away from the noise in the restaurant would help. My poor husband waited outside the ladies’ room, helpless… and I was inside, scared to death.

But God sent an angel. Her name was Lisa.

Lisa asked Ryan if everything was alright. He told her what was happening and immediately she said, “Oh! I’d bet she’s having a panic attack, the poor thing! I’ve dealt with those for years. I’ll go talk with her and see if I can help calm her down.” And in she came. She spoke to me tenderly through the stall door. She told me she knew that I was terrified but that everything was going to be alright. She offered advice and gave me hugs when I finally came out. She suggested that I head to a health food store and ask them about natural supplements for panic attacks and sent me on my way. We thanked her and immediately followed her advice!

And that began my very long, difficult journey with panic attacks. For two years I waded through article after article, desperate for answers. I tried many different supplements and a few different prescriptions. Some things helped, but were temporary. I knew I still needed to find the answer. But I had no idea where to look.

But God sent another angel. His name was Pastor Miller.

I was on a church women’s retreat. I still struggled mightily with my panic attacks – I even had a few while on the retreat. But I still knew so very little about what caused them or how to stop them. While on the retreat, I had many options – watch movies, read books, take long walks, stay up late with friends… early in the retreat when I was considering how I would spend my time, I heard a still small voice inside. My Lord said, “Search for answers. This weekend marks the beginning of your healing.” You can imagine how thrilled, and yet skeptical, I was at that moment… all that aside, He proves Himself to be a man of His word. So I searched.

I went right upstairs to the man who owned the retreat center. I knew he was a retired pastor as well as a bit of a “health nut”. But I was going to take my chances! Right up to him I went and without hardly any introduction or background I asked, “What can you tell me about panic attacks?”

He went straight to a book filled with natural remedies and photocopied a few pages out of it for me. What I saw in that article, I could hardly believe! It wasn’t another article recommending that I try this medication or see this kind of doctor. It actually pointed me to the cause of my panic attack disorder! Success at last!

Without getting too much into the medical jargon, the article talked about people who are sensitive to a temporary waste product in the body called lactate, or lactic acid. People who are sensitive to lactate will have severe panic attacks when injected with a lactic acid solution – in “normal” people, or those without this sensitivity to lactate, the solution has no effect whatsoever. People who have recently suffered a panic attack show high levels of lactate in the blood. So, as the article said, “reducing the level of lactate is a critical goal in the treatment of anxiety and panic attacks“. All of this information I then confirmed by reading an article here.

Both articles then listed 6 things that lead to elevated lactic acid in the bloodstream! You can imagine my thrill – I was finally getting somewhere with my research:

Simply cutting back on these things in my diet, and ensuring that I was not deficient in any vitamins, helped me immensely on my path to curing my panic attacks. I avoided the triggers like the plague for a long time, then was gradually able to add each back into my diet (minus my particular food allergy triggers). But my panic attacks had only diminished – I was aiming for complete defeat here!

I knew what some of my triggers were now, thanks to these articles. But what else? I started paying much closer attention to the patterns in my panic attacks, and figured out the ONE thing that caused my panic attacks without fail – dehydration! If I sensed panic attacks coming on, I would immediately drink 1-2 glasses of water. I found, much to my delight, that this would short-circuit my panic attacks every time.

This one  combined with avoidance of the six above mentioned triggers led to my complete healing from panic attacks. I am proud to say that I have been panic-attack free for the past eight months now. No medications, no fear!

Put these new tools into your arsenal and begin experiencing freedom for yourself. Combine them with a healthy diet, a good support system, and regular exercise, and you’re well on your way to making your panic attacks a thing of the past.

(IMPORTANT NOTE: I am not a medical doctor and this advice is not meant to replace the advice of a medical professional. This is simply my own journey and I offer my story in the hope that it might be able to bring healing to others currently struggling with panic attacks.)

Stacey is a wife and a mother to four young children (6,4,2,1). She and her husband Ryan are devoted followers of God and are striving to please Him in all that they do. They have a heart for passing on practical information to this present generation and seeing young persons thriving! Stacey's current favorite inspiring Bible verse is John 3:30 - "He must increase; I must decrease." Stay connected for more practical advice for pursuing holiness in the trenches of everyday life!

This site uses Akismet to reduce spam. Learn how your comment data is processed.

Get new posts by email

There are many lessons to learn from the book of Job, but this morning I was struck by the first chapter of Job. The first thing that…